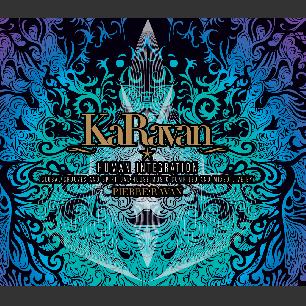 Welcome to the 3rd edition and session (2008) of KaRavan of Pierre Ravan, that it’s called “Human Integration”.

According to the esoteric standpoint, music is the beginning and the end of the universe. All actions and movements made in the visible and invisible world are musical. That is: they are made up of vibrations pertaining to a certain plane of existence.
The man of science says that the voice comes from the spine, the diaphragm, the abdomen, and the lungs, the mystic says that sound comes from the soul, the heart, and the mind. Music, according to the ancient people, was not a mechanical science or art: music was the first language.
KaRavan is the Spiritual Journey through Music linking the Beginning with the End.
Pierre Ravan is heartily inviting you to join his Journey and Dance from where the SUN (CD1-SunDance) and the MOON (CD2-MoonDance) meet each other.
CD1 starts from more Soulful to Vocal to Deep and Melodic Sounds of the Sun …and  CD2 Takes you to a more Progressive and Tribal sound with a Deep and Dark touch of the Moon… and All with Strong Spiritual Message
(Next page the detail Track listing)

KaRavan of Pierre Ravan Nights are launched worldwide with Special Gigs and Parties and Pierre Ravan is inviting top DJ’s, artists and friends who has played alongside him and supported him all over the world and creates a Spiritual House community that spreads the real message of music – love and unity – which he believes is what House music, was meant for..

ENJOY THE RIDE AND SEE YOU AT THE NEXT STOP……