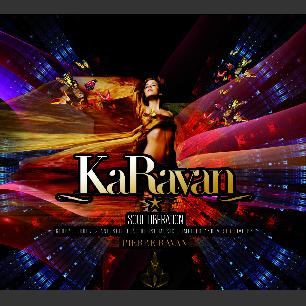 Welcome to the 5th series of “KaRavan”, the unique concept of Pierre Ravan, named “Soul Liberation”.

The concept is based on a Spiritual Journey through Music from a soulful & deeper sound extending to a darker & progressive mood, all in one single journey (in 2 CDs) linking the beginning with the end.

All of Pierre Ravan´s previous KaRavan compilations (Spiritual Dance, Human Integration, Unity…)
conveyed the true message of love through his music starting in a daytime stretching to a late night time.

“A liberated soul knows that he is not the doer. He knows and feels that he is a mere instrument for the higher power. It is this awareness that enables him to be a channel for divine light. A liberated soul does not deal with his own individual will and individual freedom;
he seeks only to be a channel for the Divine Will.”
Pierre Ravan is heartily inviting you all to come and celebrate life and let yourself go with this music where the Soul Journey starts with a Soulful sound in the Day time (CD1) and ends in a Darker environment of Soultek (CD2) till it reaches his final destination.
Spirituality is Joy, Happiness and Bliss because the SOUL is able to expand and get on the way to the Source where it comes from..

Pierre Ravan is one of the first fashion djs in the world and has played in every four corners of the globe for some of the fashion worlds most influential designers. Like Paco Rabanne,
Dolce & Gabbana, Roberto Cavalli, Thierry Mugler, Jean Paul Gaultier and so on.

Having been on the International dj circuit now for well over a decade, Pierre is a well respected dj, producer and remixer bringing a new aura to the house music scene aswell as a different variety of house music he likes to call “Spiritual House”.
This is the perfect interfusion of his individual emphatic energy, ancient Persian heritage and a feel for the global dance-floor.
He was one of the first DJ/Producer to spread HOUSE MUSIC in the Middleeast and has released productions on labels like “EMI/Capitol”, Deep Dish “SCHINICHI” label and Cassagrande.

Of course Pierre Ravan´s latest single, that he produced with Spin Science “Eyes Should be washed”
is on this silver disc. It was released on the much liked Conya Records label for the Winter Music Conference in Miami and caused massive waves in the house community, including dj plays by
big names like Osunlade, DJ Pippi, Grant Nelson, Behrouz, Hardsoul and many others.

Also Kidcult´s “Paris Jamaica”, which is also on Conya Records is on board, in a fancy Bruno Be remix.
Furthermore the soulful side features Haldo & Morrison´s “When we get up”, Neal Conway´s
“Release The Anger (DJ Spen’s Summer Madness Re-Edit)”, as well as productions by artists like Scope, Tuccillo & Kiko Navarro and Deep Zone´s classic “It’s Gonna Be Alright” in a modern outfit.

All together 25 classy and timeless true house tracks are on Pierre Ravan´s
“KaRavan – Soul Liberation” double compilation.
Enjoy & feel the spirit!
See you all on my Dance floor, no matter if it is night or day!

KaRavan of Pierre Ravan Nights are launched worldwide with Special Gigs and Parties and Pierre Ravan is inviting top DJ’s, artists and friends who has played alongside him and supported him all over the world and creates a Spiritual House community that spreads the real message of music – love and unity – which he believes is what House music, was meant for..
ENJOY THE RIDE AND SEE YOU AT THE NEXT STOP