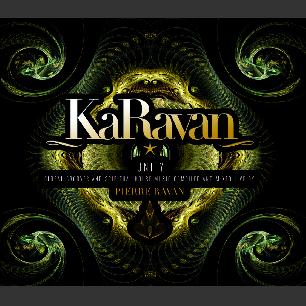 Welcome to the 4th edition of KaRavan by Pierre Ravan, that it’s called “Unity”.

The concept its based on a Spiritual Journey through Music from a soulful & deeper sound extending to a darker & progressive mood, all in one single journey (in 2 CDs) linking the beginning with the end.
All of Pierre Ravan´s previous KaRavan compilations (Spiritual Dance, Human Integration…)
conveyed the true message of love through his music starting in a daytime stretching to a late night.
In the early days, when house music was born, the whole idea was to get UNITED and celebrate love & life through this music… “Its UNITY of God & human, a UNITY whereby humans find God within themselves, everywhere and beyond”. As Rumi quoted: “My Place is the no-place.  My Image is without face neither of body nor the soul.  I am of the divine whole.  I eliminated duality with joyous laughter; saw the unity of here and the here after.  Unity is what I sing, unity is what I speak, unity is what I know,
Unity what I seek”
Pierre Ravan is heartily inviting you to join his Journey and Dance from where the Descent
(CD1 and the Ascent (CD2) meet each other. CD1 starts from more soulful to vocal to deep and melodic sounds …and CD2 takes you to a more progressive and tribal sound with a deep and dark touch …
and all songs have a strong spiritual message. The compilation features tracks by artists like Bob Sinclair, Jay Tripwire, Jerome Sydenham, Claude Monnet, Jimpster,Ben Watt, DJ Fudge and many others.

KaRavan of Pierre Ravan Nights are launched worldwide with Special Gigs and Parties and Pierre Ravan is inviting top DJ’s, artists and friends who has played alongside him and supported him all over the world and creates a Spiritual House community that spreads the real message of music – love and unity – which he believes is what House music, was meant for..
ENJOY THE RIDE AND SEE YOU AT THE NEXT STOP…