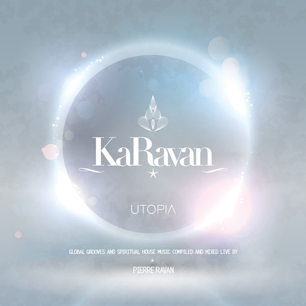 Welcome to the 8th edition of “KaRavan”, the unique compilation concept by Pierre Ravan from Dubai, who is now also the resident dj and artistic director
of the brand-new Pacha Dubai.

KaRavan is Pierre Ravan´s personal concept based on music for all hours and minutes of the day. The concept is based on a Spiritual Journey through Music from a soulful & deeper sound extending to a darker & progressive mood, all in one single journey linking the beginning with the end.

All of Pierre Ravan´s KaRavan compilation albums conveyed the true message of Love and Unity through his music starting in a daytime stretching to a late
night. After the success of last year KaRavan”L.O.V.E”, KaRavan 8 is named:“UTOPIA” that was conveyed to Pierre Ravan through his Spiritual brother as an ideal place and society where it is all about harmony between Human and Nature. Utopia is not a place but a state of mind, where the Heart is the center of all existence.

The Raw Artistic Soul Remix of Ralf GUM feat. Kenny Bobien´s “The Only Way” is on board, as well as the Mike Huckaby mix of Jazzanova & Paul Randolph´s “I Human” and Marc Romboy´s dub of Terrence Parker´s “Love´s Got Me High”.

CD2, “Dusk” completes the balance between day & night as the music gets deeper and darker. The disc features tracks and remixes by John Tejada, Argy, Rocco, Klement Bonelli feat. Robert Owens, Leach & Lezizmo, Jordan Peak and many others. The smash hit “Stig Boardersman” by Culoe de Song can be found on this silver disk, as well as “Partenza” by Chus & Ceballos & Marlon D and many other breathtaking tracks.

Dedication Pierre Ravan:
This work is dedicated to my Divine Master and the new Soul of Rashid
descended to our family from the Brighter World.